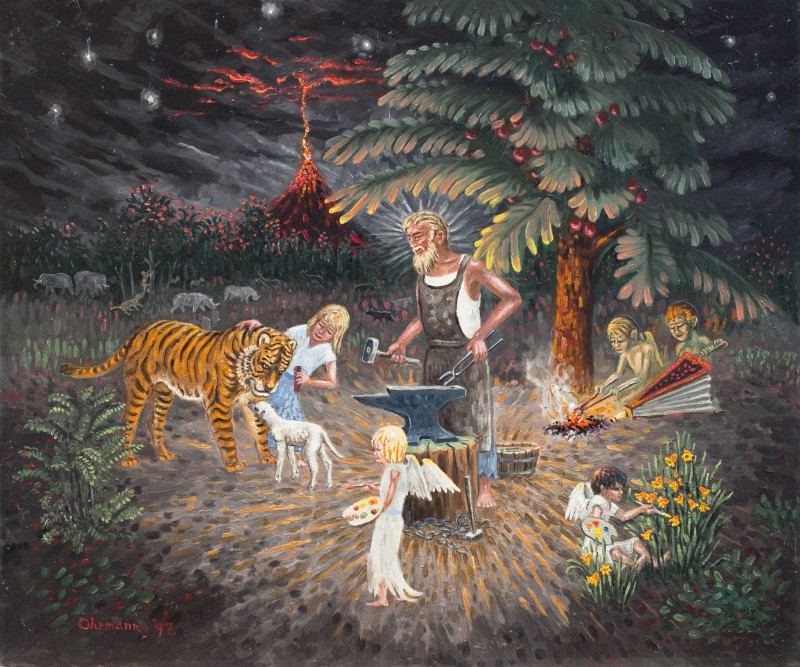 Drummond, Montana artist Bill Ohrmann is no stranger to MAM and his influence in the region is undeniable. This survey exhibition coincides with the release of the book, Tainted Revelations: The Art of Bill Ohrmann, written by Joe Ashbrook Nickell, sponsored by MAM, and published by the University of Washington Press. Nickell has spent the last five years writing the book and will be speaking the night of the opening reception.

A self-taught artist, Ohrmann has an uncanny versatility as an extremely productive painter and sculptor. While MAM has featured Ohrmann with a solo exhibition of his paintings in the past, Tainted Revelations will serve more as a survey of the artist’s multi-faceted approach to his practice. In addition to the paintings, many sculptures in a variety of media will be featured. A large, steel fabricated work will also be exhibited outside.

Ohrmann is influenced by his ranching roots. He was born in Hall, Montana, close to where he now lives in the Flint Creek Valley at the base of the Pintler Mountains. It is a rich valley with diverse attitudes toward animal husbandry and land usage.

His subjects suggest the beleaguered everyman rather than the triumphant hero, layered with skepticism and sometimes sarcasm. The land he paints sometimes seems remote and harsh, often dry and desolate. The landscapes he constructs serve as stages where humanity is trapped, engulfed, and puzzled. In the paintings there is humor, but there is also an underlying and looming concern, helplessness of the impending consequences of our own stupidity. His observation of human fragility is simple, and there is plenty to observe. He targets human consumption, religiosity, insincerity, selfishness, ignorance, mistreatment of animals, and narcissism. He is a Montanan who follows the Golden Rule, only one should keep in mind that Ohrmann’s rule extends to all living creatures.

Ohrmann’s paintings are profoundly influenced by the bridges that he built with the literary community. First and foremost among them was the poet John Haines. Haines, who passed away in 2011, was the recipient of a lifetime achievement award from the Library of Congress. When contemplating this friendship we are reminded that both of these gentle humans worked out of a tradition of American Transcendentalism. Like Emerson and Thoreau, they welcomed a collaborative spirit, with a voice reinforcing and emulating the spirituality of nature itself.

Ohrmann makes direct statements through his paintings. Australian painter Sydney Noland returned from WWII and changed his painting approach to a very direct painting style and subsequently captured the imagination of a nation. His 27 Ned Kelly paintings are rough, but considered a national treasure and reflective of the Australian zeitgeist. Another example is the self-taught artist Henri Rousseau whose service in the French army led to the work “Peaceable Kingdom”.

Over the years, Ohrmann has stuck with forthright and honest expression. His audience has ready access to his work, and is able to relate to it through historical and contemporary concerns. He is consistently offering insights into the consequences of our behavior. In his work, we can absorb a voice of wisdom that speaks to the future, suggesting that if we don’t change, there will be dark days ahead.

Bill Ohrmann passed away shortly after this exhibition closed at the age of 95.  His work is on view at the Orhmann Museum in Drummond, MT. He was a cultural treasure who focuses not just on himself, but humanity as a whole.