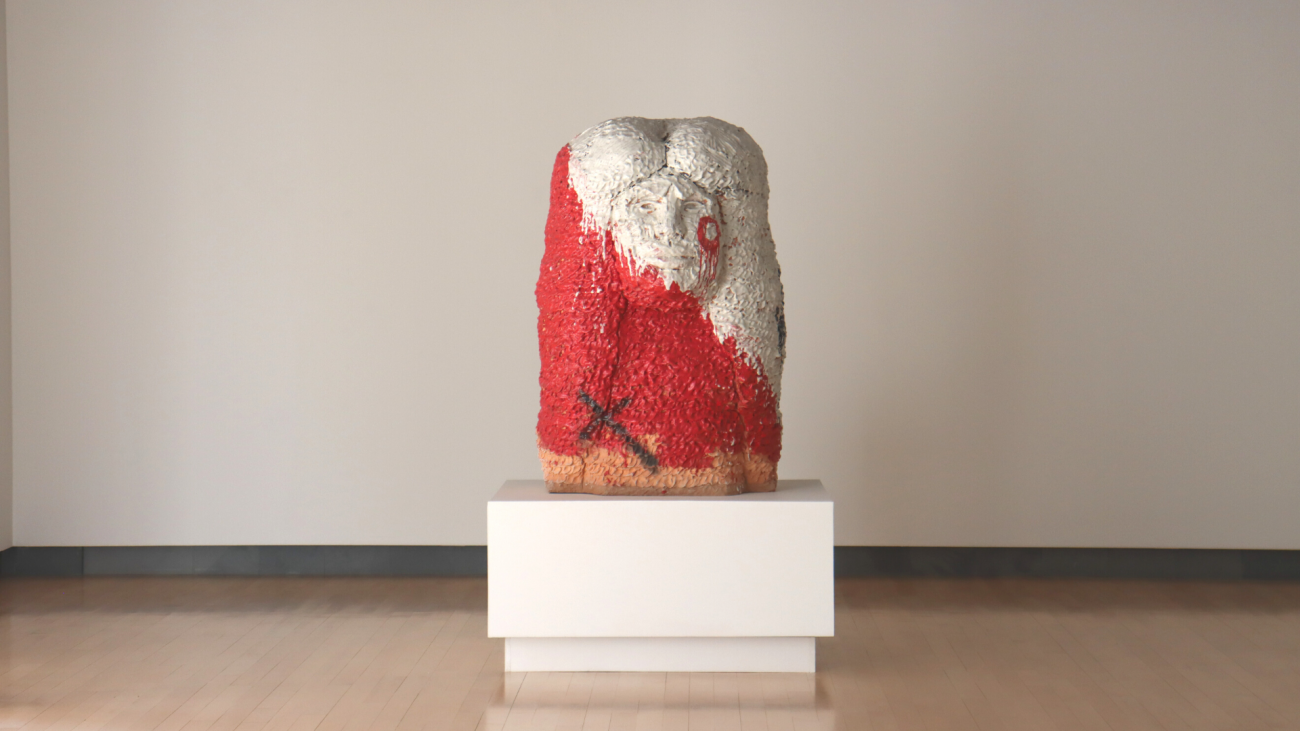 Halfmoon’s latest collection of work was created during her recent residencies at the University of Montana Ceramics department and Archie Bray Foundation for the Ceramic Arts. Known for her monumental figurative sculpture, Halfmoon’s exhibition features her bold figures that are a continuance and expansion of contemporary Caddo culture.

Halfmoon is from Norman, Ok. and a member of the Caddo Nation, which has a long tradition of ceramics, particularly pottery. She recently completed a two-year residency at the Archie Bray in Helena, Mont., and is one of a very few Native artists to participate in its prestigious international residency program.

The artist hand-builds her sculptures with coil and uses thick layers of black, white, or red glaze cover exposing areas of raw clay. The bold and sizable figures, some of which top several hundred pounds and rise over 9 feet tall, represent women and Caddo’s matrilineal culture.

“I consider [the sculptures as] multiple facets of me,” said Halfmoon. “But they also represent multiple generations—my great-great-grandmother, grandmother, my mother, my aunt, cousins, my ancestors, and what they’ve created.”

Sometimes Halfmoon scrawls declarations across a piece. Most prominent are the artist’s name in bold letters—an assertion of identity, determination, and agency—or pithy phrases that counter racism and stereotypes.

“Halfmoon’s work is cultural work,” said Brandon Reintjes, senior curator at the Missoula Art Museum. “Just as she is extending our understanding of Caddo culture specifically, she is fighting stereotypes of Native people broadly, all the while contributing to the development and understanding of contemporary ceramics.”

The Caddo Nation is today a federally recognized Tribal Nation headquartered in Oklahoma with a cultural history of over 5,000 years in the southeast region of the U.S. The pre-contact and historic “Caddo confederacy” (Caddo comes from the word Kadohadacho – or true Chiefs in the language) landbase included southeast Oklahoma, southwest Arkansas, northwest Louisiana and northeast Texas – a massive region centered around the great bend in the Red River. Beginning in 1835 with the Louisiana Purchase and continuing until 1859, the Caddo people were forcibly removed from their ancient homelands and settled in Indian Territory (present-day Oklahoma) near the town of Binger in the southwest part of the state.

Halfmoon attended the University of Arkansas earning double bachelor’s degrees in ceramics and cultural anthropology. Since then, she has garnered an impressive series of awards and accolades, including being named the 2018 Fund the Change recipient from the Activist and Social Justice Arts Organization in Oklahoma as well as a Burke Prize finalist at the Museum of Arts and Design in New York, the American Craft Council Emerging Voices Award, and Ceramics Monthly Emerging Artist—all in 2019. Last year, she also received a John Michael Kohler Arts Center residency in Sheboygan, Wis. Halfmoon’s first exhibition in New York City, “Okla Homma to Manahatta,” was on view at the Ross + Kramer Gallery in early 2021. The artist is also represented by Kouri + Corrao Gallery in Santa Fe, N.M.