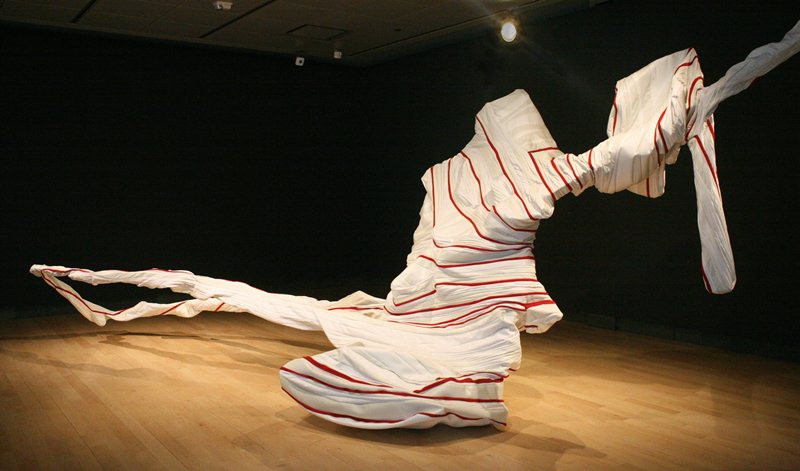 Abbie Miller is a talented, up-and-coming artist creating exciting sculptural installations with distinctive materials and an original vision. Originally from Billings, Miller received her BFA from the University of Wyoming with a minor in apparel construction, holds a Post-Baccalaureate Certificate from Maryland Institute College of Art, 2005, and earned her MFA from Cranbrook Academy of Art in 2007. After graduate school, Miller moved back west to Jackson Hole, WY, and worked as a fiber instructor and tailor while pursuing a career as a fashion designer. She integrated into Jackson Hole’s small but vital contemporary art scene, exhibiting her sculpture in group and solo exhibitions.

MAM will feature Miller’s talent and creative process in the form of a site-specific installation entitled Abbie Miller: Exit Strategies. Ever since MAM re-opened as an expanded museum in 2006 the exhibition staff has sought out artists working in installation and large-scale sculpture to create original works for the new beautiful spaces. The Aresty Gallery on MAM’s main floor, featuring a long, open site line across its split level, has consistently been the space to attract the attention of artists. After a recent visit to MAM, Miller enthusiastically accepted the challenge to create a new work that will draw inspiration from and interact with the large, multi-level space.

“For the Missoula Art Museum, the galleries’ use of movement both in structure and metaphor fascinated me. The gallery, with two sets of stairs running at longitude and latitude through the space, has an architecture that felt like a type of precipice of sorts, a division between spaces that one has to integrate into, step up and onto. This became a really exciting opportunity to connect two separate spaces with one sculpture, one line,” states Miller.

Miller’s aesthetic is unique and honest, drawing equally from her art education and passion for fashion design. The artworks are an innovative amalgam of fiber, fashion design, and contemporary largescale sculpture. The sculptural forms are architectural in scale and express figurative movement.

Further advancing the perception of a living figure in the forms is the vinyl covering that is the surface of the work. Evoking clothing or skin, the vinyl wrinkles and stretches, it sags or gathers, and it also holds the work together. Vinyl is shiny and slick; the smooth surface is expressive and seductive and nostalgic of a certain sex appeal. The structure of the sculpture is constructed with lumber and then skinned by wrapping the armature with vinyl that is held together by a continuous zipper.

She builds the form and sews the “skins” simultaneously; it is an intuitive process that Miller says is akin to drawing for her. The final piece is never fully realized until the last zipper tooth is zipped into place. For Miller, the zipper is a decisive element in work both metaphorically and as a crucial physical structure. She states, “it facilitates order in my sculptures in a structural, engineered way being that it is a single line that fuses stitched marks and vinyl into a whole, unified object. A zipper creates identity. So it is a threshold of sorts.” 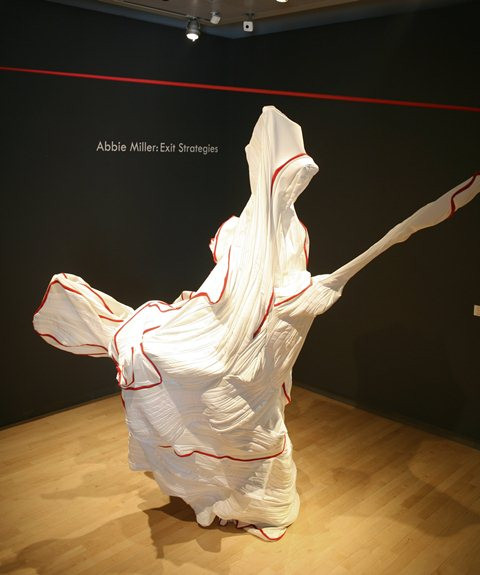