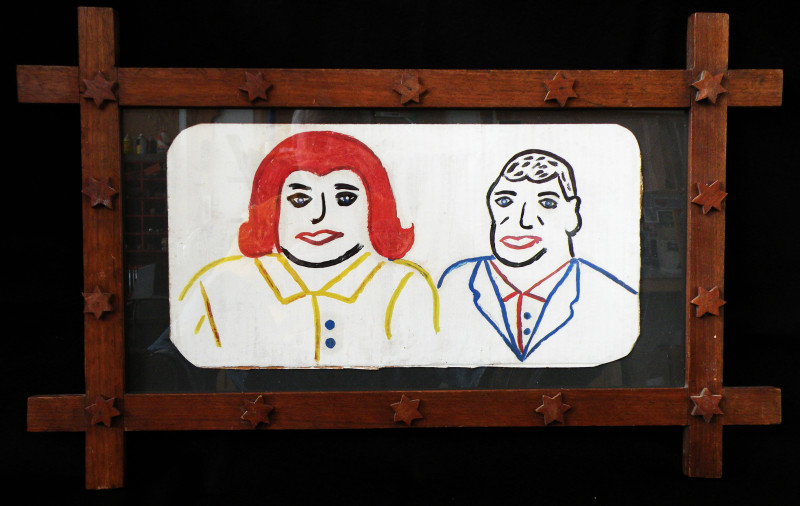 Alva Gene Dexhimer was born in Clarksburg, Missouri in 1931 and lived in central Missouri his entire life. As a five-year old boy, he fell off a tractor and suffered a severe head injury. This accident led to major learning disabilities, which caused him to drop out of school after the eighth grade. The years he attended school were spent primarily drawing, and he continued to draw throughout his lifetime.

MAM is indebted to Willem Volkersz who has graciously lent this definitive body of work by this important self-taught artist. Volkersz, a retired professor from Montana State University, is also featured in a solo exhibition in the MAM lobby. It is a lesson we learn over and over again, that so often the self-taught artist that many refer to as an outsider is often collected and supported by artists associated with academia.

Volkersz states, "In the early 1980s, an artist/friend came upon the trailer on his way to the Ozark region of Missouri and began to spread the word about this extraordinary artist among his friends. I immediately paid the artist a visit and purchased some work. In 1984, I included Dexhimer's work in FOLK ART/FOR SALE, an exhibition and sale I organized for the Kansas City Art Institute. Shortly thereafter, his work was included in Deliberate Lives: A Celebration of Three Missouri Masters at First Street Forum in St. Louis. In subsequent years, I included his work in two traveling exhibitions I organized, Word and Image in American Folk Art (for the Mid-America Arts Alliance) and The Radiant Object: Self-Taught Artists from the Volkersz Collection which was organized by Montana State University."

Within a few years of Volkersz first meeting him, Dexhimer developed diabetes. Complications from this disease led to a stroke and, several months later, to his death at the age of 52 in 1984. Volkersz, an extensive collector of this genre of work, purchased much of the work the artist left behind.

Sponsored by the Brink.