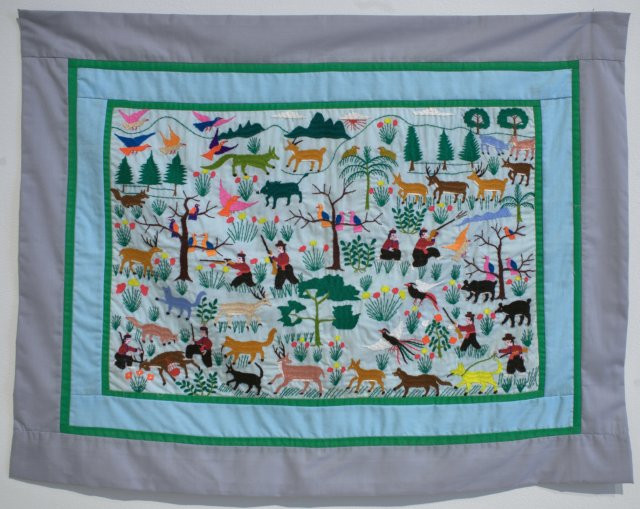 Crossing the River: Hmong Story Cloths is an opportunity for MAM to highlight the rich culture of the Hmong people. MAM’s permanent collection includes a wonderful variety of over 240 Hmong textiles including clothing, ceremonial garments, flower cloths, and, featured in this exhibit, wonderful Hmong story cloths.

The story cloth form of Hmong embroidery is a recent development in the ancient Hmong culture, first produced in the Thai refugee camps in the mid-1970s as a means of earning a livelihood for thousands of refugee families. But these colorfully and delightfully rendered embroideries are also a fresh take on the Hmong’s rich tradition of storytelling, and allow Hmong elders to communicate traditions, history, and folklore both with a wider international audience and with younger generations of Hmong raised in the United States.

In 1961, Jerry Daniels, a Missoula smoke jumper turned CIA operative was appointed liaison officer between Hmong leader General Vang Pao and the CIA, coordinating the guerilla war between the Hmong and the Lao and Vietnamese communists, secretly financed by the American government. In 1975, the United States pulled out of Southeast Asia and the Laos government fell to the communists. To escape retribution, thousands of Hmong fled across the Mekong River to refugee camps in Thailand. Daniels was appointed Chief Ethnic Affairs Officer in charge of the Lao refugees, and helped his Hmong friends resettle in the United States. In 1976, hundreds of Hmong families were brought to the Bitterroot Valley and Missoula to escape the communist takeover of Laos.

Though known as legendary jungle fighters, the Hmong were also an industrious and peaceful people who valued the land and made their living from agriculture, hunting, and trading. These embroideries share the Hmong people’s rich histories, legends, and traditions in a skillfully rendered and enjoyable visual vocabulary accessible to all.

Unknown, How Cloth and Garments Are Made From Hemp

Unknown, Legend of the Vegetables Walking to the Farmer's House