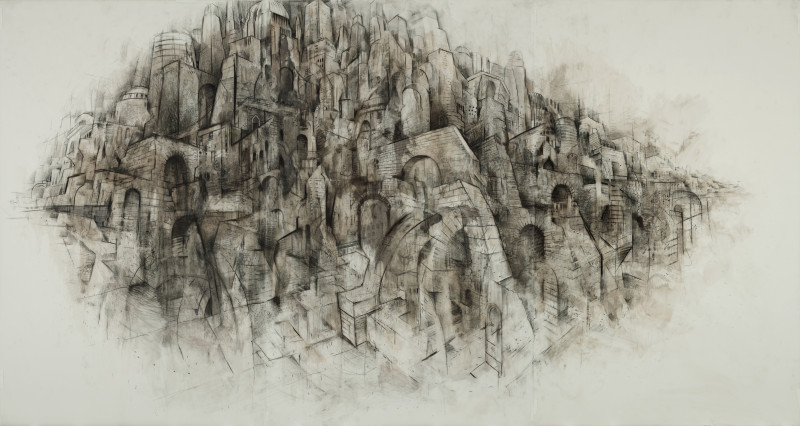 Doug Russell is a visual artist who lives and works in Laramie, Wyoming. His exhibition, Confluences, is a large, concise body of work encompassing three separate series of drawings. Each series explores the passage of time and cyclic changes through Russell’s visual language of layered, evolving marks and transparency centered on monumental compositions.

Edifice, which comprises seven mixed media works on paper, is a literal study in time, process, and evolution. In continual progress since 2005, Russell explains of the series that “the drawings reveal the passage of time through years of mark-making choices and changes.” The final phase of the drawings, recently realized in 2011, was to use the architectural forms common in his recent work to “develop and flatten the illusion of space”. Empire is a series of eight drawings that employ pencil, ink, graphite, and China marker on Mylar, a semi-translucent surface that seems made for Russell’s intricate, layered marks. Of the Empire works the artist states, “they are explorations of improvised gestural drawings of imagined monumental architectural forms.” Where the Edifice series reveals years of marks from Russell’s enveloping style, Empire gives the viewer the foundation of his most recent series of refined, colossal drawings. Ebb and Flow is a series of twelve large drawings completed in 2010 and 2011. The works range in size from 40 inches by 25 inches, to a large-scale installation — a monumental drawing of quiet, chaotic decay and slow, organic re-growth, larger than eight feet square. Ebb and Flow is Russell’s “reflection of [his] perception of the compression of history, culture, and time” — and indeed these imagined, compressed civilizations are marvelous worlds unto themselves.

MAM is excited to introduce Missoula to Doug Russell with this exhibition of original drawings. More often than not, drawing is used as a tool by artists to explore ideas that are later formalized in other media, be it painting, sculpture, or printmaking. Russell, on the other hand, readily absorbs the influences from these media to educate his visual investigation and inform his visual language while remaining rooted in the traditions of drawing. The body of work exhibited in Doug Russell: Confluences leaves no doubt that drawing is a powerful and beautiful medium on its own.