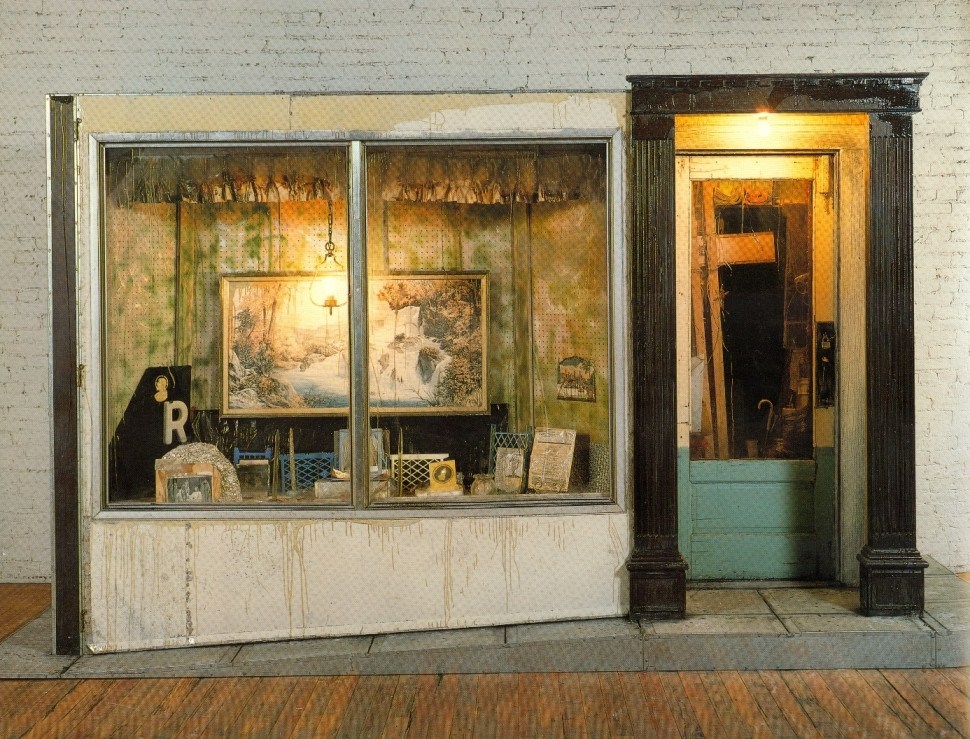 The Missoula Art Museum is proud to bring to the community The Jesus Corner, an important installation by one of the art world’s most rebellious and provocative figures Edward Kienholz and collaborator Nancy Reddin Kienholz. The Kienholz’s installations have been described as assemblage with a vengeance, confronting and exposing the harsh realities of American life that mainstream society often failed to address or even acknowledge.

The Kienholz’ s conglomerations of found objects, mannequins, and plaster cast figures address difficult racial, political, sexual, and psychological subject matters, often bluntly and brutally, capturing a dark view of the human condition. The Jesus Corner, produced in 1982, is one of Ed and Nancy’s more affectionate pieces. The Jesus Corner uses material salvaged from a condemned building in downtown Spokane, a faithful reconstruction of a store window display by a man named Roland Thurman, who rented the shop on a monthly basis but never opened the store to the public. The window was filled with pictures, cards, and symbols carefully arranged into a Christian shrine. Despite diligent effort, neither the Kienholz nor the building’s owner were able to find the renter. Though Kienholz was an avowed atheist, he was touched by Thurman’s “honest and humble expression of one man’s belief and dedication to a supreme being.”

Kienholz was born in Fairfield, WA, a small farming community in the wheat country just south of Spokane. After high school, he left the farm and travelled throughout the west, working odd jobs and, as a largely self-taught artist, making art. In 1953 he arrived in Los Angeles, where he would remain an integral part of the art scene for the next 20 years.

In the 1950s, Los Angeles was considered an art backwater with no modern art museums and few galleries. New York City was the undisputed center of the art world, dominated by the Abstract Expressionist titans of the time. However, a mood was developing against the dominance of Ab Ex, an art considered by a growing group of artists as too formal, remote and angst-ridden. L.A. offered freedom from an established way of seeing, making, and marketing art and fueled the creativity of artists such as Ed Ruscha, Ken Price, David Hockney, Judy Chicago, and others.

Kienholz’s twenty-year career in L.A. was highlighted by his controversial retrospective at the Los Angeles County Museum of Art in 1966. County supervisors were outraged by the explicitness of Kienholz’s tableaux, especially Back Seat Dodge ’38, and demanded that the artwork be removed or the whole show shut done. However, LACMA’s director and the museum board stood their ground, and the exhibit remained. Kienholz’ s retrospective had the largest attendance of any contemporary art show at LACMA up to that time, cementing Kienholz’s reputation.

In 1972, Kienholz met photographer Nancy Reddin. The two proved to be compatible both personally and artistically, and soon married. In 1981, Kienholz took the extraordinary step of adding Nancy’s name retroactively as coauthor to all of the work they had created since 1972, and all subsequent works were signed by both artists.

Following a 1973 fellowship awarded by the West German government, the Kienholzes began a routine of spending half the year in Berlin, and the other half in Hope, ID. Kienholz was always considered a California artist, though he left L.A. in 1972. Over the years, his reputation flourished and the prolific artist worked and exhibited until his passing in June 1994.

The Jesus Corner comes to MAM from the permanent collection of the Northwest Museum of Arts and Culture in Spokane, WA, to whom we are deeply grateful. This exhibition is generously sponsored by the Paul G. Allen Family Foundation. MAM would also like to thank Rocky Mountain Moving and Storage & Reineking Construction for their support.

Piece of honesty: Ed Kienholz found art ‘The Jesus Corner’ is a ‘humble expression of one man’s belief’ - The Missoulian - November 8, 2013