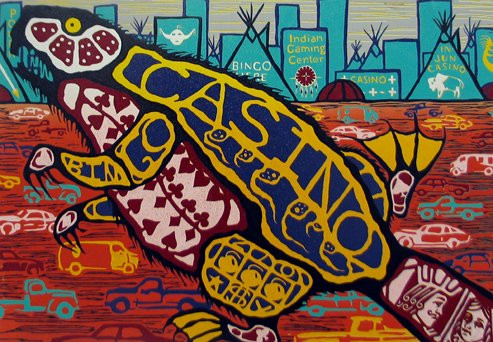 The presence of words both as a compositional element and as direct content messengers is taken for granted today, but in the past, the notion of lettering in a work of art was considered taboo. “Graphic Design,” “Advertising,” and the “Book Arts” were clearly delineated from the “Fine Arts.” In the mid-19th century, many modern movements rebelled against the rules handed down by the fine arts academies established by European despots. The Cubists were the first to use collage and actual text in their paintings in the 1910s. During WWI, the DaDa artists freely used language in their artwork, performances and films, and other modernist movements such as Surrealism soon followed suit. The Pop Art era, beginning in the late 1950s, pioneered by Warhol, Rauschenberg, Lichtenstein, and others, smashed down the wall between the graphic arts and the world of “high art.” The conceptual artists of the late 1960s strongly incorporated text into their art, and artists such as Jenny Holzer, Ed Ruscha, and Barbara Kruger also popularized the use of text in art. By the mid-1970s, graffiti art broke into the realm of “high art,” further infusing the art world with text-based painting.

There has been an ebb and flow of acceptance and usage of words in the art world, with the wide acceptance of words in Pop Art and at the same time an utter rejection of words in the minimalist aesthetic. There is an open acceptance of lettering in Outsider art compositions, and a rejection of lettering amongst practitioners who follow the more romantic and traditional painting styles of landscape, the figure, still life, etc. There are plenty of movements and academic thought that adheres to the adage that if you can use words, then why paint? Painting provides a unique form of expression that cannot be communicated in words.

The artists in this exhibit have chosen the former route, skillfully repurposing advertising imagery, type, and the spoken word, to enhance the visual elements of their compositions while driving home a certain message.

Jaune Quick-to-See, In the Future we will all be Mixed Bloods and Mestizoes