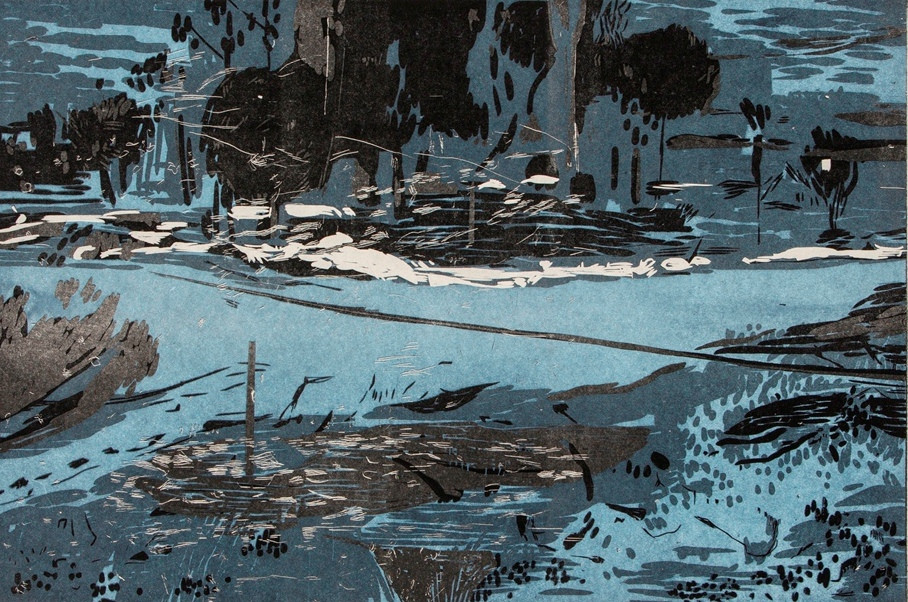 This exhibition combines two of Bozeman based artist Gesine Janzen’s bodies of work that use river imagery to explore the passing of time and the elusive qualities of memory.

Janzen employs multiple print processes such as woodcut, monotype, lithography, and intaglio to layer multiple colors, forms, and veils of ink. These layers reflect the physical qualities of flowing water and mimic the act of recollection.

Janzen states, “I make images about the landscapes that have shaped my life. The indirectness of the printed image interests me because it is something removed from the initial thoughts, drawings, and actions of the artist. I work with this indirect process to build surfaces and create a quality of uncertainty. This is a creative process that includes reflection, inexactness, the depiction of an ephemeral space, and the passing of time. I look for something more than what is in front of me. I make pictures that employ the process of searching and discovery to express thoughts, sensations, and specific qualities surrounding a place.”

Janzen began to use rivers metaphorically in her work when she made the decision to trace her ancestors from central Kansas back to the Vistula River Delta in Poland. They had lived there for centuries, but left due to political pressure. Janzen says, “My artistic interest in rivers began with a 2009 trip to Poland to draw the Vistula River, which was home to my ancestors for three hundred years. They farmed the floodplain of this river and thrived along its banks, until they were forced to leave. My family’s total absence in that place where they had lived for so long struck me deeply, and what became central to my work was a strong sense of the landscape, not the people, as the only permanent entity over time.”

Janzen continued to create prints of Montana rivers, connecting her home near the headwaters of the Missouri in Bozeman to her family home in Kansas. Janzen states, “Seeking a connection with the landscape of Montana, I began looking at the Missouri… the river continues toward the Midwest and winds its way toward my childhood home in Kansas. Having focused on the Kansas landscape in my artwork for many years, the river became a physical connection between my present and my past life.”

In 2011, Janzen expanded the series by traveling to places impacted by the high water as the Missouri flooded, cities such as Kansas City, Omaha, and Pierre. In the backwaters and eddies, Janzen discovered debris washed downstream from the wreck of flood waters, and noted how “the absence of people…emphasizes the ephemeral quality of life along the river, which continues its eternal stream unaware of the human activity around it.”

This exhibition unites Janzen’s bodies of work that depict rivers. Janzen has created a powerful meditation on connection and loss, places of origin and later descendants, sensations that are familiar and foreign, and that which is cultivated versus that which is uncontained.

Janzen is Associate Professor of Art and Head of Printmaking at Montana State University (MSU). She grew up in Lawrence, KS, and studied at Bethel College, the University of Kansas, and Studio Art Centers International in Florence, before receiving an MFA from the University of Iowa. Prior to coming to MSU, she taught at the University of Missouri and the Kansas City Art Institute.