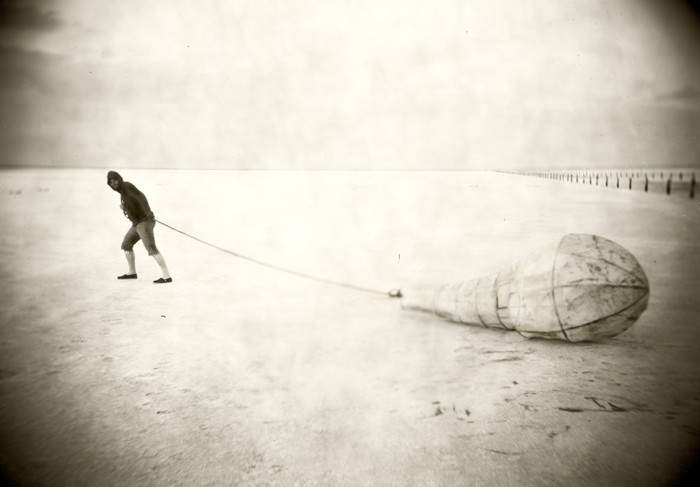 Joshua Meier: The Parables (and Other Impossible Events)

"The power of the parable lies in its ability to speak directly about our reality while existing completely outside of that reality," states photographer Joshua Meier about his new exhibition of photographs at MAM. A traditional parable is a succinct story, fictitious in nature, and with a moral or religious lesson that touches on a universal truth. Meier carefully and meticulously stages models and props to create his photographs of visual parables.

The images certainly evoke surrealism, with dream-like worlds and improbable scenarios, but they are more. The artist crafts each individual narrative from personal milestones, frustrations, doubts, sadness, and joy. "Like a parable," Meier says, "each image is a distillation of my own reality as it relates to the greater society."

This body of work represents eight years of creative and personal struggle, examination, and growth for Meier. The series began while Meier was living in Missoula and has expanded slowly and intensely for the artist since he and his family moved back to his home state of Oklahoma.

As a young photographer, it may seem novel that Meier chooses film and the large format camera to capture his creative narratives but they are an integral part of his creative process. Meier's keen eye for composition and light is accentuated by the large format, his skillful hand in the darkroom, and creative toning techniques. The resulting images are dreamy and warm; they invite the viewer to a comfortable, nostalgic place to rest and ponder.