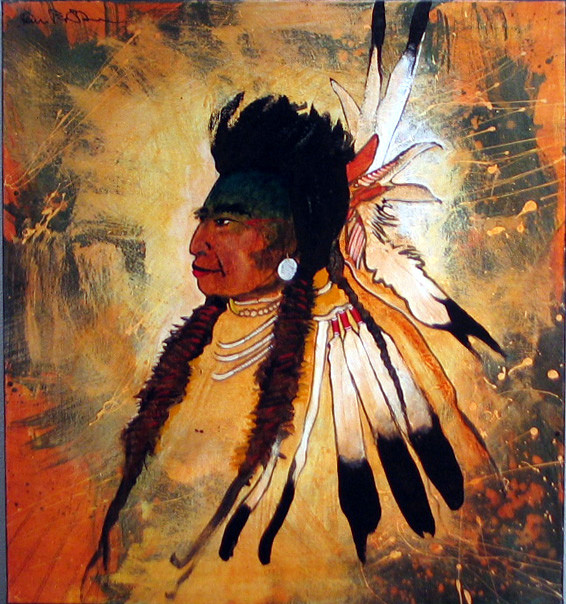 MAM is pleased to present Kevin Red Star, a celebrated artist in our region. Red Star draws from his Crow tradition and culture for his subjects, both historical and modern. He was born in 1943 and raised on the Crow Indian Nation in Lodge Grass, Montana. His family, heritage, and abundance of visual experience serve as his palette. He conjures evocative images of his ancestral Apsaalooke (Crow Nation)—its culture, and its history.

Supported by nurturing and creative parents, Red Star was a gifted young artist. In 1962 he was invited to join the inaugural class of 150 students from 80 tribes nationwide at the Institute of American Indian Art (IAIA) in Sante Fe, New Mexico. The founding of the IAIA was visionary. The institution hoped to offer an environment where young people from reservations across the country would gain access to state of the art resources and instruction. At the IAIA, Red Star explored the images of his own Crow people and was exposed to the visual imagery generated by artists from across the country.

The 1960s was an important time of development, coupled with the backdrop of rising political awareness in Indian country; the IAIA had a profound influence on the artists they nurtured. Many Indian artists during this time came to reject the crass commercialization which tended to demean and draw attention to negative stereotypes that were pervasive in popular culture. Red Star remained focused on celebrating the positives in Crow culture. The impact of the IAIA cannot be understated. Three years in Sante Fe led to his admission to the San Francisco Art Institute. In San Francisco, Red Star began attending openings at galleries and museums, gaining a more serious appreciation of the professional art world

Red Star has never strayed far from his roots, eventually establishing his studio and gallery in Roberts, Montana. His influence on the arts in the region has been profound. It is undeniable that many young American Indian artists have emulated his work for the past 30 years.

He is considered a historian and ambassador for his native Crow culture. He states, "Indian culture has, in the past, been ignored to a great extent. It is for me, as well as for many other Indian artists, a rich source of creative expression. An intertwining of my Indian culture with contemporary art expression has given me a greater insight concerning my art. I hope to accomplish something for the American Indian, and at the same time, achieve personal satisfaction in a creative statement through my art."

His work is included in permanent collections in prestigious institutions such as the Whitney Museum of Western Art, Heard Museum, Denver Art Museum, and National Museum of the American Indian. The exhibition will be shown in the Lynda M. Frost Contemporary American Indian Art Gallery. This gallery is dedicated to honor the creative cultural contributions of American Indian people to contemporary art and to ensure that Indian artists will always have a place to celebrate that contribution.