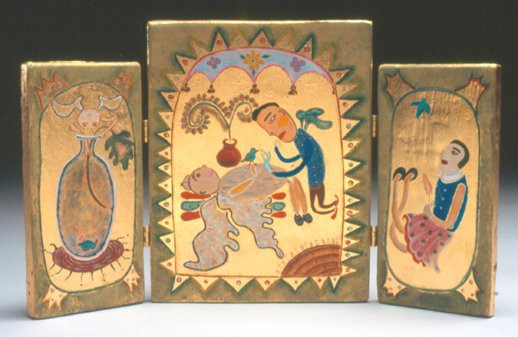 Lulu Yee's narrative style of painting has for years depicted simple joys of everyday life. People sitting down for a meal, reading a book, or sleeping became a way of documenting what Yee describes as "happy blessings many of us share".

Born in 1962 in the San Francisco Bay area to teachers of Home Economics and English, Yee recalls a very happy childhood. She has especially fond memories of the Monkey Club, a special group formed between herself and her older siblings. Her fascination with whimsical sock monkeys continues and in fact, they often appear in her paintings, representing to her, goodness and innocence.

Yee's paintings also reflect her passion for collecting. Even though her formal art education began at the San Francisco Art Institute, she attributes her interest in collecting and recording personal stories to the influence of her mother, an avid collector, and a creative homemaker. Though Yee has lived on the east and west coasts, for much of her life Missoula has been her home base, and from Montana, she has traveled throughout the world.

Among the works included in the exhibition were the following: