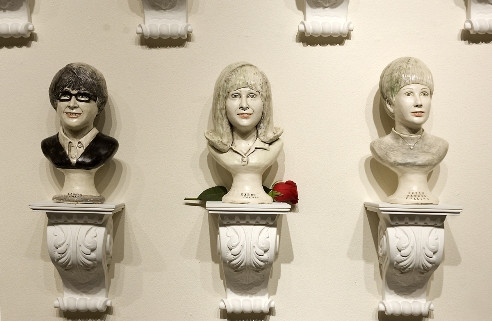 Good Girls 1968 is an installation that consists of over 160 ceramic portraits of young women with whom Marilyn Lysohir graduated from high school. The installation involved reconnecting through hours on the phone with many of the girls captured in the portraits. Lysohir is a renowned ceramicist and although Good Girls 1968 is grounded and created from one person's point of view, this exhibition transcends the personal and discovers its impact while touching the audience's cultural memory and reminiscences. Like many of Lysohir's ceramic works, her disciplined research paid off. In August of 2008, Lysohir installed these ceramic portraits at her high school in Sharon, Pennsylvania for her 40th class reunion. Many of the "girls" came to the opening and Lysohir had the opportunity to share memories and revisit the past.

The 1960s was a period of great change in U.S. history. In particular, 1968 marked a year that many consider a pinnacle of cultural revolution and turmoil in the United States. That year saw America embroiled in Vietnam with both the Tet Offensive and the My Lai massacre, the capture of the U.S.S. Pueblo, George Wallace's third party candidacy, vocalization about the use of nuclear weapons, the release of the Beatle's White Album, the assassination of Martin Luther King Jr., Andy Warhol was shot, Walter Cronkite openly criticize the U.S. Policy in Vietnam, the musical Hair open in London, Robert Kennedy's campaign and assassination, Chicago's police crack down at the Democratic Convention, the Mexico City Riots, Women's Liberation movement and "bra-burning", the launch of Apollo 7 and Apollo 8, the black power salute at the Summer Olympics in Mexico City, Jacqueline Kennedy marry Aristotle Onassis, the U.S. repeal the Gold Standard, Rowen and Martin's Laugh-In air, student protests intensify, the U.S. Scorpion Nuclear Submarine sink with 99 men on board, the United Auto Workers separate from the AFL CIO, Ringo Starr quit The Beatles, and Richard Nixon rise to power and his election to President. Layered on top of all of these events, were the changing attitudes associated with religion, sex, marriage, and drug use. In so many ways, 1968 served as a watershed year when a heavy dose of realism thrust a dagger into the heart of a fairy tale past. There was no turning back after 1968, and the collective cultural conscience of the country was never the same.

While Lysohir captures a snapshot in her life, we soon discover that these faces transcend Sharon, Pennsylvania, and capture a time when many cultural doors were closed and others opened. The nature of the work touches each of us through the association of our own reunions, reminiscences, memories, and acceptances of those doors both opened and closed.

Lysohir states, "My work is inspired by my family and my friends and the working-class milieu in which I grew up. When I begin a piece I start with a personal idea -such as the death of my grandmother or my father surviving World War II, and then this idea evolves into a formal composition which usually takes me a long time to work out. So for me, as an artist, any piece is about communication and memory, and documenting the journey upon which all humans embark...from birth to death."