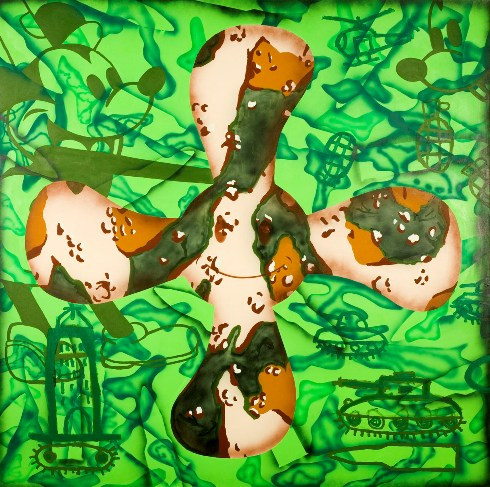 These recent works by Michael Sarich include paintings, ceramics, and large assembled puppets, all laced with his characteristic imagery and wry social commentaries. Some symbols, such as Mickey Mouse and the Virgin Mary, are employed as a way of commenting on commercialization and globalization while others, such as fishnets and beach balls, are plucked from personal events and experiences. Sarich utilizes painting, sculpture, and ceramics to present his work, but regardless of medium, drawing is ever-present and provides a foundation for his expression and storytelling.

Sarich selected the exhibition title after realizing, "Babel described a city thwarted in building a tower to heaven when God created a confusion of tongues; a confusion of voices, etc". This apt title also describes Sarich's sense of layering and mark-making, exposing his viewer to multiple images and revealing a plethora of influences and possible meanings. Through this language of layering the familiar and the iconographic, Sarich presents us with a new Babel, followed by a hush, and in the end a question and an answer.

While Sarich employs cultural and religious iconography in his works, many personal narratives of his childhood and family relationships also emerge. The Virgin Mary and the skull imagery of the Mexican Dia de los Muertos seem to be rooted in his Catholic upbringing. Other symbols such as Mickey Mouse, tattoos, graffiti, and cartoons are used to create something that rises above their intended commercial and visual appeal. 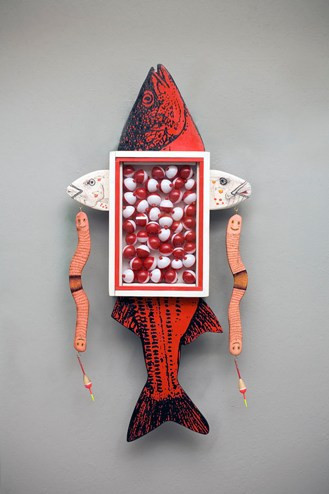 Sarich received his MFA from the University of Oklahoma and has been a Professor of Art at the University of Nevada, Reno since 1989. The artist traveled to Montana in 1985, and became Artist in Residence at Paris Gibson Square Museum of Art in Great Falls, in 1986. His relationships with the arts and art community in Montana are deep and rich and have remained strong. His work appears in many public and private collections, including the MAM Collection. Since his time in Montana, Sarich has emerged as one of the most dynamic and prolific artists in the American West. As an art educator, he leads by example and has instilled in hundreds of students the importance of embracing one's own voice with unyielding passion and enduring commitment. Sarich has been featured in many national and international exhibitions including his retrospective exhibition at the Nevada Art Museum in 2008. This exhibition at MAM is not only a celebration of this new work but also serves as Sarich's return to a place where he has made a lasting impression.

MAM would like to thank the University of Nevada at Reno, College of Liberal Arts Scholarly and Creative Activities Grant for their generous support of this exhibition. Like Love Lust, a catalog produced in conjunction with a 2008 Michael Sarich Retrospective at the Nevada Museum of Art, is available for purchase in our bookstore or online. Click here to purchase.