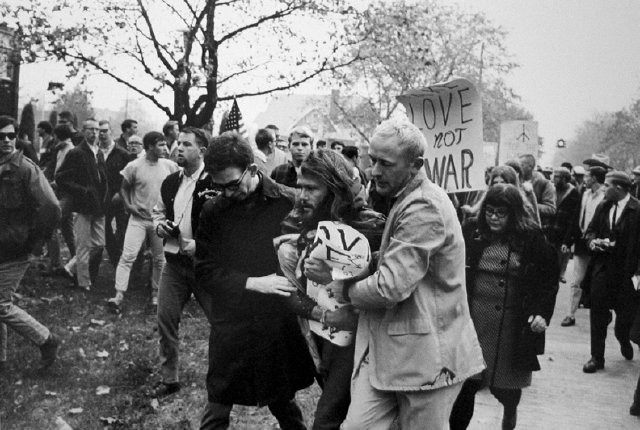 Throughout history, artists have seen parades, circuses, and other strange spectacles as sources of both empathy and inspiration. This was especially true in the last century when modernists such as Picasso, Chagall, Klee, Kandinsky, and Calder used parades and circuses as source material in their work. Such processions and gatherings, marchings and minglings, protests, and celebrations occur for many reasons, providing a rich world of metaphor, psychology, and observation.

We perused the collection with this in mind, keeping a keen eye on ways in which local artists have seen the gathering of people as source and message material for their own work. In the collection vault, we found Stan Healy's voyeuristic documentation of parades and gatherings from the detachment of staff photographer to the overtly political commentaries of Marvin Messing, Sheila Miles, and Jim Todd. We found the psychological explorations of Mary Ryan and Kathy Shiroki, and the frenetic and desperate energies displayed in the works of Jay Rummel and Walter Piehl.

But undeniably, parades and other festive events bring out the voyeur in us all. Entranced by the color, pageantry, and weirdness we find ourselves either outside observing a strange or menacing mob or invited to join the comfort of a celebratory or purposeful throng.

MAM is proud to maintain a collection presence throughout its exhibition schedule and is committed to not only see its collection grow but to celebrate that these outstanding artworks are held in trust for the community and for future generations.