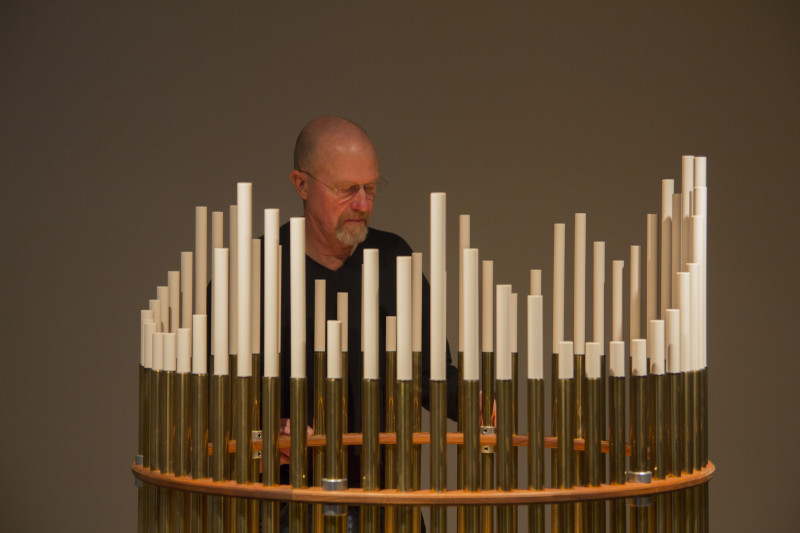 Trio is a sound installation artwork donated to the Missoula Art Museum in 2011 by Billings art collectors and connoisseurs John and Carol Green. The Greens are avid collectors of Montana art. Concerned that too many artworks by Montana’s best and brightest artists were leaving for out-of-state museums and private collections, the Greens have made a focused effort to ensure that significant works of contemporary ceramics, painting and sculpture remain in Montana, available for the enjoyment of Montanans.

Trio consists of three individual “instruments”: a “drum” entitled Renowind; a “cello” entitled Puget Sound Table; and a “flute” entitled Horizon (Songline) Translator. The pieces interact with the outside environment by way of rooftop receptors that collect information about the velocity and direction of the wind. The information is then translated into electronic pulses and sent to each sculpture. Programmed with computer chips, the sculptures respond acoustically to the slightest variations. The genius of the sculptures is that the instruments take very precise, scientifically gathered bits of information and transform them into kinetic and acoustic dances that force those in the vicinity to notice what is going on outside the museum.

Patrick Zentz has spent his career translating environmental phenomena into extraordinarily poetic, kinetic, and informative sculptures. Raised on a cattle ranch near Laurel, MT, he initially intended to pursue a career as a doctor. While studying biology at Westmont College in Santa Barbara, CA, Zentz realized he was not as interested in studying life forms as he was studying the interactions between life forms. To Zentz, art was the ideal way to explore this vein of thought, and he returned to Montana to study sculpture, earning an MFA from the University of Montana in 1974. Soon after, he bought the ranch next door to the one he grew up on and settled into the dual career of rancher and artist.

Cinematography and editing by Bobby Jahrig. Produced by Nick Davis.

Zentz interprets the relationship between today’s mechanized farming operation and the land as one where “farmers act on nature with their machines.” He inverts this relationship in his art to explore the ways nature impacts machinery. In an interview with the Seattle Times he explained, “Basically, the environment has always fascinated me. I grew up in the range lands of Montana and it’s a haunting place. So in my art, I was intrigued by the notion of translation, the idea of taking natural phenomena, putting it through a mechanism, a logical system, and then ending up with a different apprehension of the phenomena.”

The Greens acquired Renowind directly from Zentz. The artwork had recently returned to his ranch following an exhibit in Reno, NV, and he installed it in a steel silo where the Greens had the opportunity to see the drumming in action. The look of the sculpture was of primary importance, but the drumming activity that translated the winds outside was an extra fascination to the two collectors. Renowind was next shown at Suyama Space in Seattle in 1999, along with its soon-to-be-collected siblings. The Greens believed all three kinetic sculptures should remain together as a Trio.

The Greens selected MAM as Trio’s home because the artwork filled an absence in the collection of a significant work by a significant Montana artist and a one-time student at the University of Montana. In addition, MAM had the interest and the space to give Trio the attention it deserves. MAM is deeply grateful to the Greens for selecting our permanent collection as the home for a work as important and vital as Trio.

The Patrick Zentz: Trio exhibition, catalog and video were produced by the Missoula Art Museum and funded with generous grants from the Paul G. Allen Family Foundation and the Pleiades Foundation.