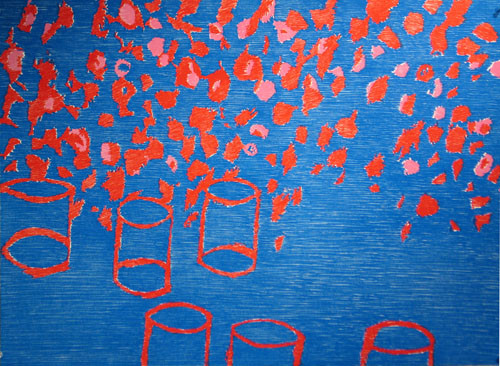 Paul Harris, born in 1925 in Orlando, Florida, is best known as a sculptor and throughout his career, he has employed almost every sculptural medium and process. From his plaster explorations of the human form while in graduate school in New Mexico in the late 1940s, to his thought-provoking and ephemeral experimental works of the 1950s utilizing plaster, papier-mâché, and string, to his marriage of high art and domestic craft in the stuffed and stitched cloth sculptures of the 1960s, Harris' aesthetic remains one of constant exploration. His drawings and prints act in the same manner as his sculptures: background meshes freely with the subject, each part functioning as both formal and narrative elements resulting in a solid look at simple relationships, where everything boldly stands for itself.

In 1969, Harris received a fellowship from the Tamarind Institute of Lithography in Los Angeles and while there created the Shut-in Suite. Harris states, "I lived alone in a rundown LA apartment amidst my own disorder. I had not intended to make a Shut-in Suite...there was just no time to go out into the world. I shuttled between the apartment and the print center for three months. At the end of the second month, I realized that my world was first, a crummy apartment and second, my imagination." Harris' crisp images in the Shut-in Suite are still-lifes seen through a zoom lens with views cropped and flattened. In some cases single objects are the focus, assuming an iconic character, like the lamp in Left a Light On. In others, the combination of flat patterns and implied dimensions causes imagery to shift between an abstract and a representational identity, as in Lawn Party. To achieve the unusual effects found in the Shut-in Suite, Harris drew on the stone, aluminum, or zinc plates using a combination of lithographic pencil, Harris Triple Ink, asphaltum, and lithotine. Harris also introduced collage elements of hand-cut self-adhesive foil and vinyl.

The Missoula Art Museum would like to thank Nicholas Harris, son of Paul, who generously donated these ten prints from The Shut-in Suite to our permanent collection in honor of Bob and Gennie DeWeese.

Paul Harris, One Night in Tunisia ( The Shut-in Suite VII )

Paul Harris passed away in 2018 in Bozeman, Montana.