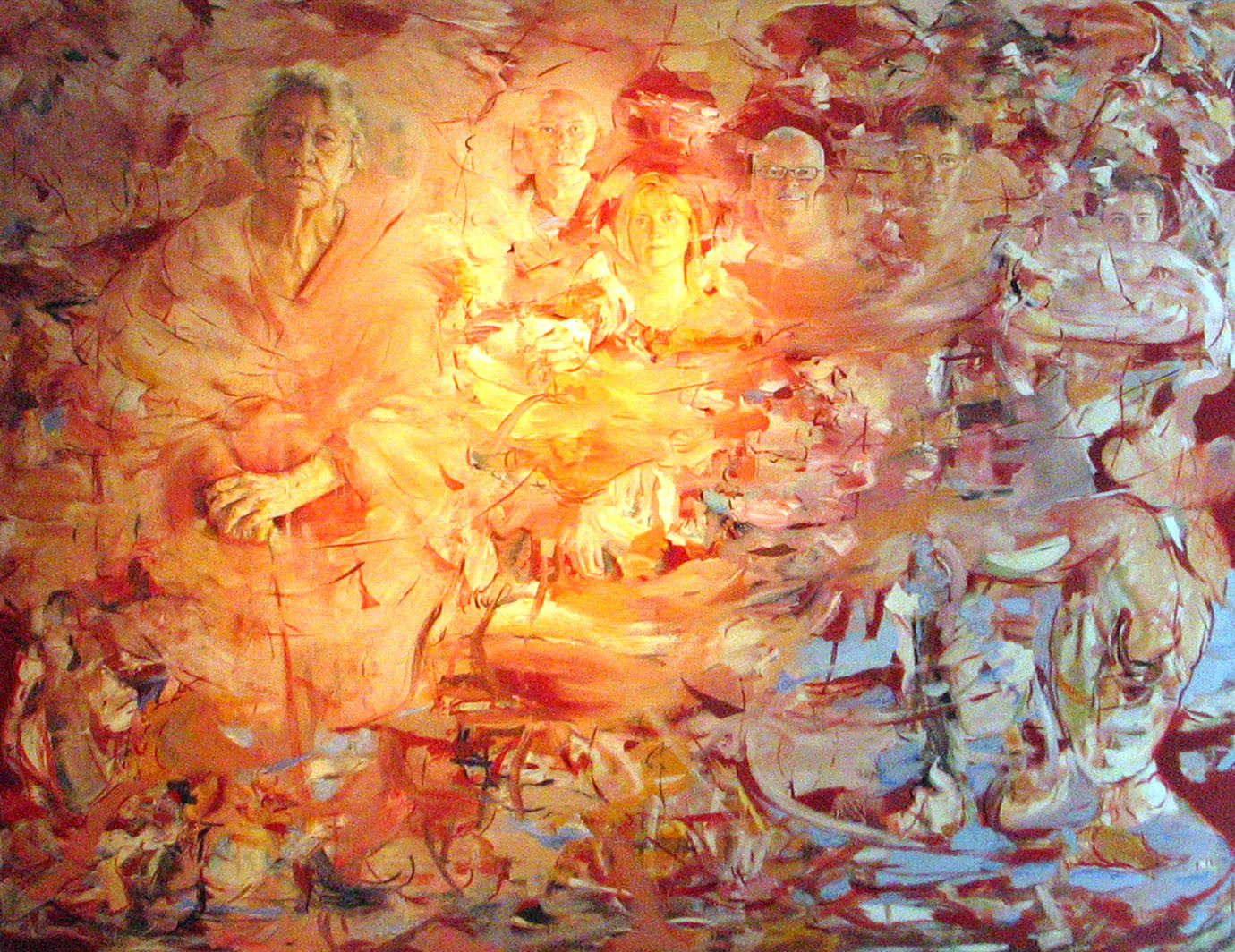 Photo: Josh Shaffner, detail of The Grandmother, acrylic, oil, and charcoal on canvas, 2007, copyright the artist.

The portrait is a compelling and provocative subject matter that has been pursued by artists for centuries. Not merely attempts to capture the likeness of the portrayed, this ancient genre serves a deeper purpose, or as Aristotle states: "The aim of Art is to present not the outward appearance of things, but their inner significance; for this, not the external manner and detail, constitutes true reality." In this exhibit, Paul Lerner, Megan Moore, and Josh Shaffner each present a unique vision of the portrait, from Lerner's existentialist struggles to Moore's probing expressionism, to Shaffner's de-constructive process works.

Paul Lerner was born in Brooklyn in 1932. Widely traveled, Lerner served in the Air Force before earning a BA in anthropology at Montana State University and an MA in Classical Archaeology from the University of Colorado. Lerner spent several years in academia before entering employment with the United States Postal Service. Then, in 1984, Lerner resigned from the USPS to take up the brush full time. He produced works traditional in subject and rendering, figures, landscapes, and still-lifes suggestive of the post-impressionists. The self-portraits on display in this exhibit are a response to a crisis of creative block Lerner suffered in the early nineties. To counter the malaise, Lerner painted self-portraits symbolic of the creative struggle, deploying a dark, moody palette with expressive individualized and gestural brush-work. The imagery captures his angst through poses: shrugging shoulders, standing with hands thrust in pockets, wringing hands, and in one picture a missing left arm. MAM is pleased to announce that Paul Lerner intends to gift his deeply personal series to the MAM Collections.

Megan Moore has studied art at institutions including Sarah Lawrence and Parson's School of Design in New York and with individuals such as Missoula's own Marilyn Bruya and James Todd. In her canvases, Moore strives to paint faces and bodies that reveal a lived life, skillfully using design and technique to capture the mystery of each individual. Moore includes a patterned or flat background in the composition to create visual tension and a sense of movement for the eye, investing the picture with vivid life and expressive color evocative of the paintings of Lucian Freud and Oskar Kokoschka.

Josh Shaffner earned a BFA in painting from The University of Montana in 2005, with a year-long side trip to study painting in the Netherlands at the Utrecht School of the Arts. Shaffner documents and animates the process of his paintings to capture the moment when he loses control of the original intent and the painting becomes something else. This often results in the complete obliteration with over-painting of carefully crafted scenes and themes months in the making. Shaffner's documentary videos dynamically capture his efforts to nail down the composition as figures emerge and submerge in a tango of color, brushstroke, and expressionistic line and form.