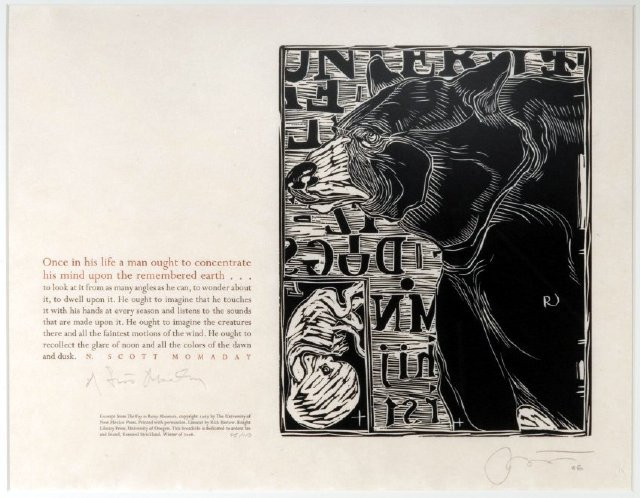 What Is A Broadside?

Broadsides have been one of the most popular printed formats and disseminators of information in European and American culture for centuries. Printed on single, one-sided sheets of paper, broadsides were used to inform the public about current events and public decrees, publicize official proclamations and government decisions, announce public meetings, advocate political and social causes, advertise commercial and private products and services, and celebrate popular literary and musical efforts. Widely distributed and designed to have an immediate impact on the observer, the often richly illustrated broadsides were posted on buildings or handed out to the general population.

The artists presented in this small exhibit have adapted this traditional and collaborative medium to combine a love of craft with an effort to share literary, poetic, and philosophical ideas. The printmaker Peter Koch, for example, in a sampling from his Hormone Derange Editions, uses interesting fonts and rhythmically arranged sentence structures below eye-catching, surreal found imagery, to display the carefully word-smithed language of poets John Yau from the Bay Area, and Missoula legends William Kittredge and Dave Thomas.

As with the other two artists featured in the exhibit, Dirk Lee and Rick Bartow, the result is an elegant and compelling visual and literary experience rooted in history and tradition.