Roger Shimomura: Minidoka On My Mind

Roger Shimomura's paintings and prints, including this series, Minidoka on My Mind, address social and political issues of Asian America and have most often been inspired by diaries kept by his late immigrant grandmother that span the 56 years of her life. Minidoka on My Mind is the fourth major painting series generated by Shimomura based on his World War II internment experience. Shimomura states:

"It is the culmination of years of my perusing images culled from books, magazines, government publications, personal recollections, and the internet. The result of this search has been a visual distillation of tar paper barracks, barbed wire, and desolate landscapes, which are inhabited by muted occupants standing in line to eat and to clean, quietly interacting, contemplating their fate...and to wait."

In Minidoka on My Mind, Shimomura challenges our notions of history and uses images rooted in popular culture to thrust us headlong into the racial conflicts of World War II, a time that witnessed the unjust imprisonment of approximately 120,000 Japanese Americans. In this body of work, Shimomura presents us with richly designed and seamlessly executed paintings that convey the emotions associated with the internment experience; emotions associated with innocent imprisonment within a country unwilling to address institutional racism. What also comes through is the resilience of the human spirit and a recommitment to remember the stories of internment camps such as Minidoka so they never happen again.

The word Minidoka is of Dakota Sioux origin meaning "a fountain or spring of water." Minidoka was first used in 1883 as a name for a Union Pacific–Oregon Short Line spur in the middle of the Snake River Plain, which later became the site of a watering station. However, The Minidoka National Historic Site is in Jerome County, Idaho, northeast of Twin Falls and just north of Eden, in an area known as Hunt. Under provisions of President Roosevelt's Executive Order 9066, persons of Japanese ancestry were ousted from the West Coast of the United States. Minidoka housed more than 9,000 Japanese-Americans, predominantly from Oregon, Washington, and Alaska. The remote high desert site was selected for the Minidoka War Relocation Center lasting from 1942–45 and is one of ten camps at which Japanese Americans, both citizens and resident aliens, were interned during World War II. Notably, 60% of the Japanese imprisoned were American citizens. Fort Missoula, just outside the town of Missoula, also served as a site for a War Relocation Center under this executive provision.

Through Minidoka on My Mind, we can reach for and gain insight into our past, and by sharing and revisiting these stories, we garner a more accurate version of our history. Ominously, Shimomura writes, "I offer this exhibition as a metaphor for the threat posed by current times, and as a warning and reminder that during international crises our government seems to consistently lose its memory regarding past mistakes."

This exhibition will be the educational foundation for the Fifth Grade Art Experience, co-sponsored with a grant from the Art Associates of Missoula. Additional funding for this exhibition is provided by the Wide World of Travel and the Historical Museum at Fort Missoula. 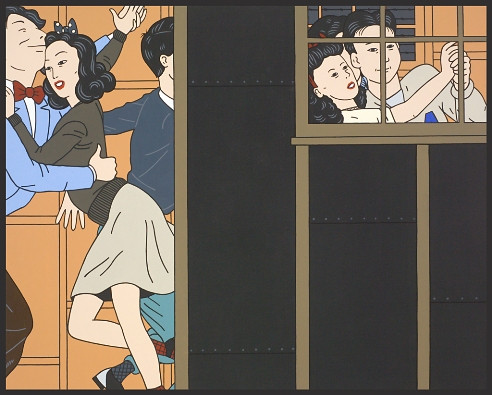