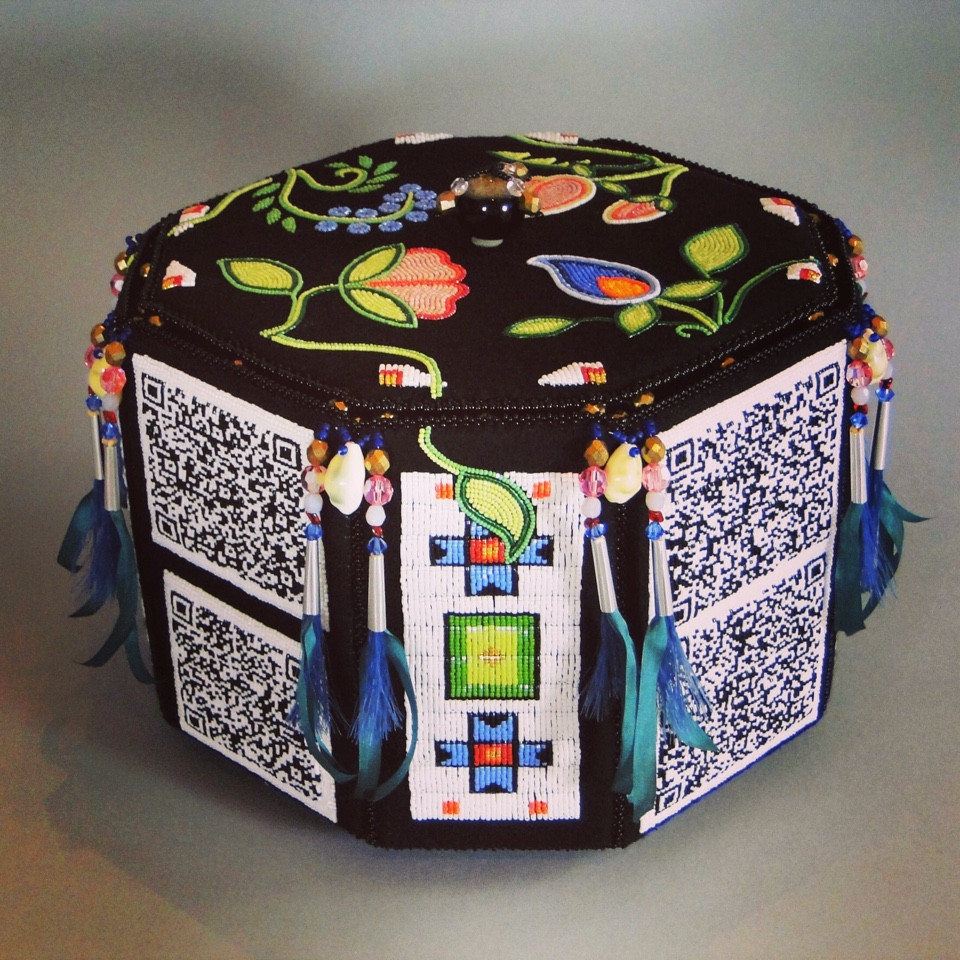 Murphy Adams (Oglala, Lakota) is a contemporary bead worker and printmaker who blends culture, identity, and histories. Anog Ite was featured in MAM’s 2018 exhibition, The Shape of Things: New Approaches to Indigenous Abstraction. Each black-and-white beaded panel is a QR code that tells a different part of the Lakota legend of Anog Ite, or double-faced woman. MAM purchased Anog Ite in part with generous support from the Contemporary Collectors Circle, a group of MAM members dedicated to supporting artists and the collection.

Artist and poet Gail Tremblay (Mi'kmaq and Onondaga) tells us the story of Anog Ite – both the legend and the artwork -- this way:

Anyone who wants to understand the power of this work or the way that it is informed by the stories of her people only needs to study the title and the beaded panels that use color and geometric shapes that have symbolic meaning in Oglala culture.

Anog Ité translates as “Face on Both Sides” or “Two Face Woman,” a person who was transformed because she and her family were tricked by Iktomi, the trickster spider in Lakota mythology. Before she was transformed, she was called Ité (Face) and was a great beauty who married Taté (Wind), and it was Ité who during her first pregnancy gave birth to the Four Winds and during her second gave birth to Yum, the Whirlwind. Because of Iktomi, Ité’s mother Kanka was told that she would have great spiritual powers if her daughter seduced Wi, the solar spirit of the Bison. Following Iktomi’s advice, she told her daughter that if she were to arrive early at a feast with the most powerful spiritual beings that she would become the most beautiful woman in the world if she were to sit next to Wi when she arrived at the gathering. Ité did what her mother suggested, and when she arrived took the empty seat next to Wi who found her attractive and enjoyed talking to her.

Next Iktomi went to see Wi’s companion, Hanwi, the Spirit of the Moon, and told her that Wi was fascinated by Ité and that Wi thought Ité was the most beautiful woman in the world. Hearing this, Hanwi put on her finest clothes and went to her place. Ité was already there sitting next to Wi. Hanwi stood behind Ité and covered her face with her robe. The whole crowd laughed at Hanwi, and Iktomi laughed harder than anyone. After that, Hanwi was so ashamed that she hid her face.

Škán, the Motion of the Universe, asked Hanwi why she was hiding her face, and she told him that Ité had taken her place next to Wi and everyone had laughed at her, and she was mourning the loss of her companion. Škán talked to Wi about abandoning Hanwi and Wi told Škán that he was attracted to Ité because of her beauty. Škán told Wi that because he had abandoned his companion and made her unhappy and ashamed that they would be separated and he would have power over the Day and Hanwi would have power over Night and that Hanwi would hide her face from him when he was close to her.

Next Škán talked to Ité, scolding her for abandoning Taté and her family and attempting to gain Wi’s attention. Ité told him that her mother told her to sit next to Wi in order tobecome more beautiful. Škán told her that as punishment for abandoning her husband and children, she would live alone for the rest of her life and that the baby she was carrying would be born premature and be raised by her husband. Then he named her Anog Ité, and gave her a second face that was so ugly that it drove people who saw it away or made them insane. Finally, he banished her from the sky.

Then Škán talked with Kanka, and asked her why she told her daughter to sit with Wi, and she told him Iktomi told her that if she did as he asked she would gain great spiritual powers, so she followed his advice. Škán banished Kanka from the heavens. Finally Škán talked with Iktomi about what he had done, and Iktomi kept laughing because he so enjoyed the way he tricked everyone. Škán banished Iktomi to earth to live among the animals and told him he would be disliked by everyone, but Iktomi kept laughing and said he would talk with the animals and just keep tricking the people on earth.

Because Anog Ité was separated from her children, she caused pregnant women to have pain during childbirth and babies to cry, but she was also responsible for teaching the Lakota to collect and dye porcupine quills and to do quillwork. By choosing to name her beautiful beaded box after Anog Ité, Molly Murphy Adams ties the art she is making to a powerful story that has deep spiritual connotations and lessons for the people. The top of the box has beautiful stylized flowers that spill over the side into four panels of traditional Lakota beadwork that uses abstract designs that also have spiritual meaning so that alternating sides of the box make reference to the Lakota worldview. Between those panels are four alternating panels that have two beaded Quick Response or QR codes, a kind of matrix barcode designed for the Japanese car industry in 1994. These QR codes can quickly be read by an optical scanner and become an efficient way of storing information to track products. By beading images of QR codes, Murphy Adams combines ancient images that make reference to the founding stories of Lakota culture with codes from modern technology; in this way, she talks about both the enduring nature of ancient stories and the survival of Native consciousness into the current century while the designs on the QR codes are made to organize the sale of product that use up the resources of the planet. At the same time, she is using beads, trade cloth and materials that Lakota artists used in the Nineteenth Century to create new artistic traditions with materials brought by Europeans to the Americas. This box by the nature of its design presents a complex picture of the way Indigenous artists can develop new art forms to keep significant traditional stories alive in the modern era.